Today I was reading Gizmag and saw a familiar name. The story was about a Hanebrink electric bike set up to pull a golf bag. Weird. Ugly. The current Hanebrink bike has been around in a non-electric version for quite sometime. They pop up in cycling related media every now and then, and each time they do, I can’t believe anyone would buy one. They appear terribly impractical and ugly, although after riding a Surly Pugsley I have to say that big tires don’t slow you down like you’d expect they might.

What this article really inspired me to write about isn’t the current Hanebrink bike, but a really old one. As many of my generation who grew up in the suburbs riding bikes likely remember, Dan Hanebrink designed a bike for Hutch that was an early iteration of the HPV genre (thats Human Powered Vehicle.. not Human Papillomavirus!) seen here on the cover of BMX PLUS magazine. 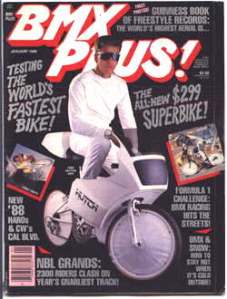 I remember thinking that this bike was so cool. In reality, I have no idea what I would have done with it. Even now, I’d probably only ride it down Kerber hill a few times and then go park it in the garage. At the time, I had no idea that gravity sports existed. In fact, I think my first awareness of such things were from the slew of “extreme” MTV programming in the early 00’s which sometimes featured stuff like street luge. In the past few years I’ve become aware of collegiate HPV competitions and Mountain bike downhill as well. It strikes me as interesting that this guy was working on this kind of stuff in the 80’s, and skirting the mainstream with it. He also competed in fuel efficiency competitions in the 80’s. Some of the designs surely must have been heavily borrowed for modern vehicles of this type. It really doesn’t seem dated at all. 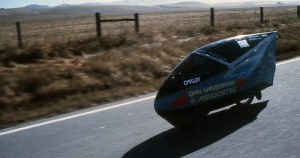 Hanebrink in a fuel economy competition