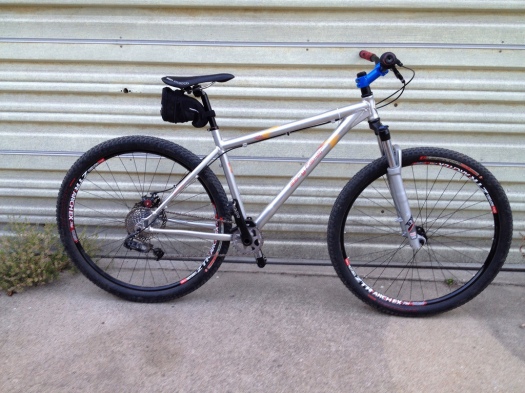 The stars have aligned to set me up with some new mountain bike gear. A bike shop employee discount, student loan check, and a filthy road bike that needs to be completely disassembled and cleaned has led me here. for the last year I’ve been running a single speed setup on my ’07 Gary Fisher XCal and enjoying it quite a bit. Still, I’ve encountered a few hills that were a bit too steep for me to get up in 32×18, and done a few road rides that had me at a laughably high cadence.

My recent upgrades started out with the SRAM’s announcement of the new XX1 groupset. It’s an 11 speed setup designed specifically to be run as a 1X. I was holding out for this group until I realized I’d be waiting until October and that it would have XO level pricing. Instead, I set out to piece together my own 1X setup. At the center of my setup is the MRP Bling Ring. It’s a 1X chain ring intended to drop onto cranksets with a removable spider. Next up, I needed to choose the crankset that I’d be bolting it to. My initial thought was SRAM’s X9, but after comparing them to lower end SRAM offerings, I ended up with the X7/S1400 cranks. The weight difference was about 10 grams and the price difference was about $100. Both cranks are manufactured the same way, with hollow arms. Unfortunately, our distributor was out of the S1400 cranks, and the currently available X7’s didn’t have a removable spider. Then I turned to the Truvativ AKA. These cranks were pretty much the same thing as the S1400 at the same price point.

Now for the rear.. I had already decided to go gripshift, and I wanted as many gears as I could cram on a standard freehub, so I used the PG-1070 cassette in the widest range available, 12-36. As with the cranks, I started looking at X9 level gear, but sadly, SRAM isn’t currently offering a 10 speed X9 gripshift. I ended up going with an XO unit, even though the price was kind of ridiculous. All online accounts of SRAM rear derailleurs seem to say that they all shift as good as the shifter you pair them with, so I saved a little money by going X7. Once dialed in, the shifter feel is very soft, but the rear engagement is very hard – “KA-THUNK”. I don’t mind the loudness, and the shifting is pretty smooth regardless. The grip shift is going to take some adaptation in technique, but I don’t think it will be bad. After one ride I was already getting the hang of it. The only thing I really don’t like about it is the increased distance that my break lever is from my hand. Some adjustments are definitely in order.

I also decided it was a good idea to ditch my boat-anchor vuelta wheelset in favor of something more modern. I ended up going with the Stan’s Arch EX wheelset with Stan’s hubs. They are _considerably_ lighter and let me run tubeless. As my first tubeless experience, I had a little difficulty mounting my tires. (my old Specialized Fast Trak LK Control’s) The beads just didn’t want to seat properly at first. I think that my main problem was inflating with a floor pump instead of an air compressor. Now that they’re on, all is good. no burps or problems otherwise.

I think I’m pretty well set up for a while. The only other kit that might be on my wish list is a dropper seat post. I generally ride out of the saddle, but now that I have multiple gears, a XC seat height is more appropriate a lot of the time. Still, the $275 price tag of the Specialized Command post Blacklight is a little daunting. I might also throw some new brakes on. Traditionally, I only run a rear, but I’m probably missing out in by not having a front. Still not sure which way I’d go if I do get new brakes.

Things haven’t been good since covid started, but the past month has thrown me some exceptional curveballs, and it’s been (and will continue to be) very tough. Gir made it to 17, but like me, she’s been dealing with kidney stones, probably for quite a while. She’s been a champ about it, but I think it just got to be too much, and her quality of life had been rapidly degrading. She left us this morning, and won’t have to suffer with it any more. Gir has been with me longer and through more moves than any other pet or person. She was small but had a big personality. She was the boss of the cats, and forced them to cuddle with her. Sometimes she was very ragey, sometimes loving. A pro chaperone cat. Always a good friend. Her “meatcat” alter ego came out one last time last night when I let her eat bbq ribs. She loved it. It was tough to choose just 10 pictures of her, but these are the ones I chose. Now that her energy is back out there in the universe, I look forward to running into some of it again some day.
UFOs.
Big ol slugs
Reminds me of the defaced “you will die” bumper sticker that was on the case of a Les Paul studio I bought from Damon after the headstock broke off.
My favorite zorak. It’s interesting to me how much a variant like this stands out in the world of tags that are so similar from one to the next.
Loading Comments...